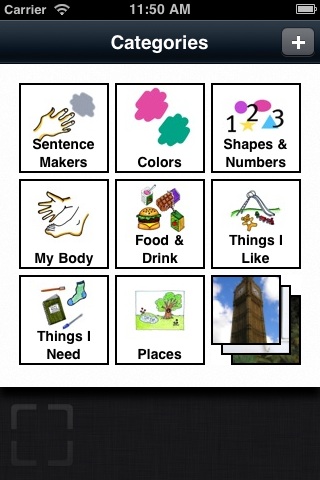 We’ve recently ordered an iPad2 for Karan, having heard a lot about how apps are being used to encourage people with autism to communicate. My brother is non-verbal, which means he does not talk to communicate with us. He has a few signs, but a lot of times we guess what he wants, based on cues or routines.

I’ve heard about a lot of apps on the iPad/iPhone for people with autism and this is one of them – and it’s going to be available for free on April 2 2011, which is World Autism Awareness Day.

Lisa Domican is a mother of two children with autism. Her daughter Gracie is severely autistic girl who doesn’t speak a lot but uses pictures to communicate. Lisa explains the concept of using pictures well: “Many kids with autism or speech delay use pictures attached to a board to ask for what they need or say how they feel. These boards are stored in a book which they have to carry around with them. Even if and when they begin to say a few words, they may be difficult to understand and so they rely on a growing picture vocabulary which can become very unwieldy.”

She says, “I wanted to keep supporting her speech development by prompting her to use her own voice – with the support of her pictures anywhere.”

She developed Grace App for this purpose and explains how it works:

Grace App replicates the picture exchange system by storing a basic picture vocabulary of Foods, Things I like, Places, Colors, Sizes and Shapes on an iPhone with a function for creating a sentence. It can also be used on iPod Touch and iPad. On the smaller devices you tilt and the cards are enlarged for you to point and read together. iPad works on Landscape or Portrait view with the pictures big enough to be read easily without enlargement. There is also a facility for finding, taking and sharing photographs of all the other things that you may need or want. You can sort the pictures into categories, delete those you don’t need and teach the child or user to add their own independently – giving them power over their communication choices.

The app was created with the support of O2 Telefonica and developed by Steven Troughton-Smith. Grace App was awarded a United Nations, UNGAID sponsored World Summit Award for m- Learning and Education in 2010.

So those interested in trying out the app can consider getting it on April 2 2011 when it will be available on the iTunes store for free. Once you have the app (whether you’ve downloaded it for free or bought it) you will be able to get whatever updates the app undergoes in the future. A major update will also be launched soon.

Lisa says, “My goal is to engage and inform as many educators, therapists, parents, carers and service providers about Grace App and hopefully as a result, get the gift of independent expression to as many people with Autism and other disabilities as possible. Everyone should have the right to say what they want. My aim is for them to get it!”

I think it would be interesting to see how users can customize the pictures to get the person with autism to communicate with a familiar photo. I know that when I try this app out I’d love to add our own pictures, just so that Karan has a sense of familiarity and it hopefully won’t be too hard for him to understand how to use the app. Last night, while we were getting ready to sleep, he pulled me downstairs and signed for food, then tried to open the fridge, then signed for toilet and ran back upstairs. It’s times like these I’d like to know what he really wanted. So fingers crossed, that apps like this one will clear up communication channels between us.

Disclaimer: I was contacted by Lisa regarding the app; I endorse her efforts to help people with autism. I have not tried the app myself, but will be doing so once I get the iPad2 I’ve ordered.